Facial recognition (or face recognition) systems are commonly used for security purposes. Today, this technique finds its application in a broad range of industries including retail, event management, hospitals, academies, defense wings, government departments, commercial establishments, banks, and financial institutions. Face recognition is a biometric method of identifying (recognizing) an individual by comparing live capture or digital image data against the stored record for that person. Before we move on, let us have a quick glance at the two terms- face detection and face recognition.

Face Detection and Recognition – An Overview

Face Detection and Face Recognition are two distinct concepts that differ completely from each other, though recognition builds upon detection. In Detection, the system identifies human faces in digital images, irrespective of the source of the image. In Recognition, the system recognizes a known face in a digital image with a known name. Here also, source is not a matter of concern. Source could be any of these: a scanned photograph, a live video stream or a CCTV footage.

Incorporating face detection and recognition technologies in businesses allows you to generate vast amounts of useful data, that can be further analyzed to derive advanced insights and business intelligence. Face recognition-powered analytics solution plays a significant role in many industries, since it reduces the gap between business and customer.

Microsoft Azure Face API offers advanced algorithms that detect human faces in digital images. Face API can detect one or more human faces in an image and display face rectangles to highlight the faces in the image. Along with this, Face API also shows attributes that include machine-learning based predictions of facial features. The attributes comprise age, gender, emotion, pose, smile and facial hair, in addition to 27 other landmarks for each face identified in the given image. State-of-the-art algorithms detect human faces in images, opening a range of facial capabilities to your applications.

Once Face API identifies the faces, it will verify to find out whether two people in an image or images are the same by using a confidence score, or compare it against a database to find out whether an identical face already exists. Face API uses the shared visual traits to group similar looking faces.

Emotion API provides you an incredible personalized experience by allowing you to build an application that recognizes emotions from facial expressions. This is a cloud-based API that detects emotions such as happiness, sadness, neutrality, contempt, anger, disgust, fear, and surprise. Emotion API analyzes these emotions based on universal standards of categorizing facial expressions. It functions in a cross-cultural manner. That means, your application will work across the globe.

Users with a Microsoft Azure subscription can implement Face API, since it is a paid service. You can create your own Face API service using the Azure portal. This helps your application to perform face detection and recognition.

The following example is based on Windows OS and source code is purely in C#. To implement these steps, you need to have a Microsoft Azure subscription.

Create Face API service in MS Azure as displayed below: 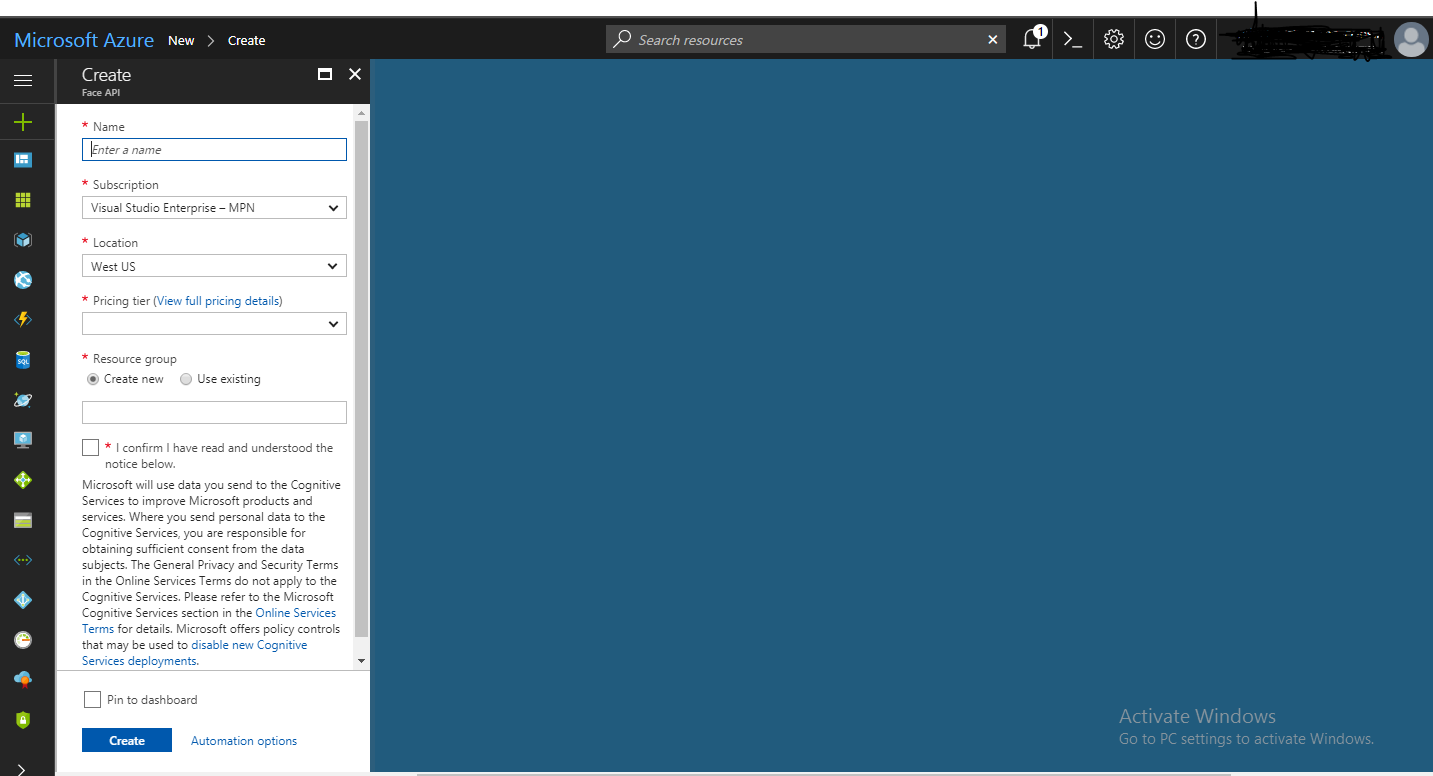 Go to “All Services” menu, where you can see your services listed. Note the subscription id, end point, and access keys which we need later in our program.

Select the appropriate price tier for creating the service. In this example, we are using the “Free Price Tier” for demo purpose.

- Authorize API call: While using face API client services, you should authorize yourself for a valid subscription key.

- Create person group: Person group acts as a container of all persons. In the following code snippet, replace personGroupId with your group name as per your requirement (example: mygroup, group1).

- Add person to group: Here we are adding persons to previously created group. 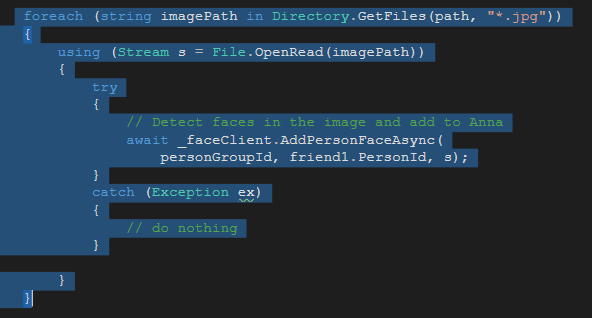 - Train person group: The person group must be trained prior to performing an identification using it. Moreover, it has to be re-trained after adding or removing any person, or if any person has their registered face edited.

- Identify Person: The following code demonstrates the process of identification. 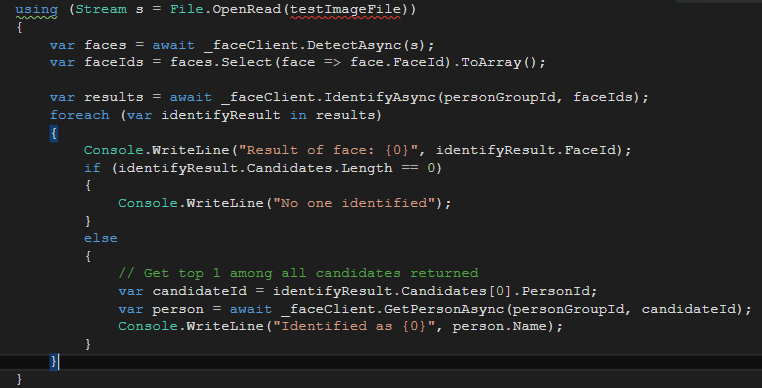 The result will appear as shown below: